Jim Rhodes, Iron Man’s friend and the tech-armored & armed hero War Machine, is going to be starring in the Marvel title IRON MAN 2.0, which is being written by Nick Spencer and drawn by Barry Kitson, will premier a new lean & mean War Machine suit. Meant to suit the new kinds of missions Rhodes will be apparently undertaking in the series, it’s premiered online to a mixed response so far. 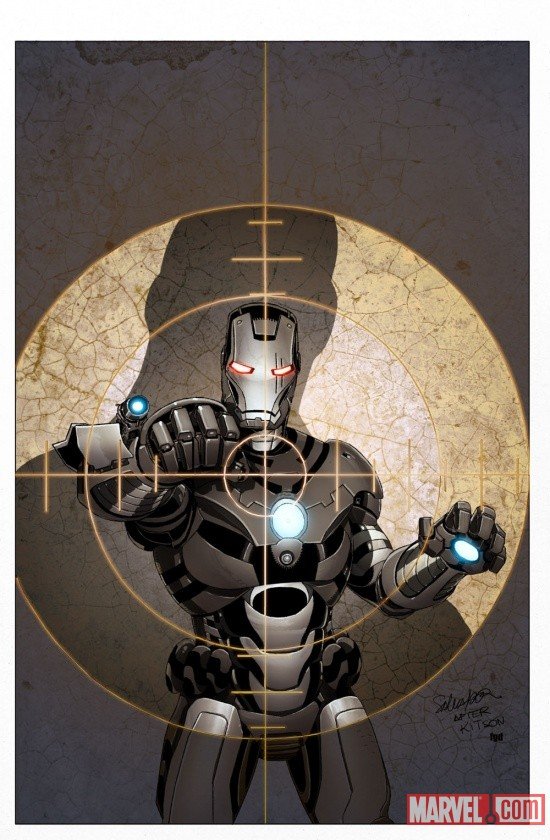 Lacking the shoulder- and arm-mounted weaponry alongside the conventional Iron Man-esque repulsor weapons in the chest and palms, this is a little different. It’s far more like the latest few incarnations of the Iron Man armor, modular and adaptable rather than just going all-out all the time.

I personally think it’s an interesting take in the character, sort of the opposite of the last War Machine series (where he was a weapons technology-assimilating cyborg, which I really dug). Forcing a conventional-type of superhero soldier to have to adapt to a new weapon and a new battlefield is going to be a challenge to do effectively, but Spencer’s shown that he’s a writer fans love and can put some faith in. I’ll definitely be giving this a chance.

Anyway, there’s also some concept art showing off some rough designs before the suit was finalized.

It’s a far cry from the original concept for War Machine, a gun-covered, weapon-bristling version of the Iron Man armor;

However, the suit still manages to convey that while it’s still a more heavily-armed version of Iron Man (the overall bulk, the “utility belt/pod” aspect, retractable weapons in the forearms, etc), it’s also keeping up technology-wise with the newest generation of the armor Stark’s using, the lightweight and streamlined “Bleeding Edge” suit/Iron Man’s new posthuman body.

Iron Man 2.0 #1 will be on shelves February 9th. Check it and the new suit out then.

2 Responses to The new WAR MACHINE